High Anxiety? Several Keys to Clearing the Lip of a Deep-Faced Bunker

If you’re planning on taking a golf buddy trip to the United Kingdom or Ireland anytime soon, you might want to brush up on your greenside bunker play. In particular, practice those deep-faced bunker shots where you’re required to hit the ball almost straight up in the air—and FAST!

Here at Bull’s Bridge Golf Club in South Kent, Conn., we have a number of deep-faced bunkers. They’re not pot bunkers, but if your ball finishes close enough to the face of the bunker, they might as well be. You’re going to have to make a few adjustments to your setup and swing to add more loft to the shot, and as always, you’ll need speed. Check out the video below for my keys to making a clean escape.

“If you play golf overseas, eventually you’re going to find your ball in a deep-faced bunker. Over there they call them pot bunkers.

As you can see, I can barely see the top of the flagstick. So what’s my plan to get this ball out of the bunker and up on the green? I’m going to start out by playing the ball forward in my stance. Secondly, I’m going to shift a lot of weight onto my lead foot, probably 70-30 percent. Next, I’m going to take the handle and drop it back. That’s going to add some loft to this 60-degree wedge. Lastly, I’m going to make a swing that takes the club up nice and vertical [on the backswing], and hit down on it—a real high-to-low motion, trying to hit about an inch behind the ball.

So remember, when trying to get out of a deep-faced bunker, put a little extra weight in your lead foot, drop the handle back, hit an inch behind the ball and swing [from] high to low. This will provide you with a high trajectory, get you over the lip and, maybe, get your ball close to the hole.” 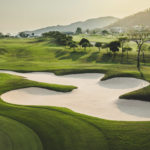 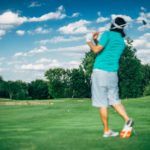 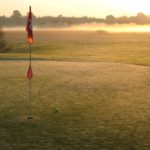 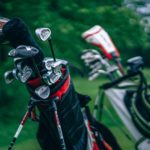